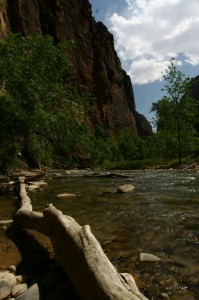 Patrick is nauseous and walks back and forth from bed to toilet and back.

However, nothing comes out of his stomach and he doesn't want to lie on the bed.

Evelien gives him a Rennie, asparagus and an hour later as planned we leave. First by car.

It's a reasonable ride, but maybe this is firstly because of waiting for the passage of the tunnel where only one©Ã©n roadway is used. Once in the tunnel I wonder why, it's wide and high enough.

Secondly, the sign is missing just after the tunnel which should make it clear that the parking spaces are here for the start of the trail. When we turn around, we will come across one of those signs and start the walk.

The stairs up consists of uneven rocks with a railing that quickly stops above to reappear on – if possible – trickier pieces. The area is beautiful. Green through groves and trees, high walls, rocks formed by the tooth of time and a path that sometimes goes along a deeper abyss.

When we meet a young couple, I look at him and ask,"Is the view worth it?" He stops whistling and looks at me. "Yes, but you are now in a quarter." We switch two more sentences with each other and then we're around the corner, me having an inside fun because of his surprised face. Shouldn't he just shout "echo" very loudly with a "g" two minutes earlier instead of a "k"…

In the end we are treated to the view over the valley. The photo and drinking moment is caught, after which the way back is used in the heat. 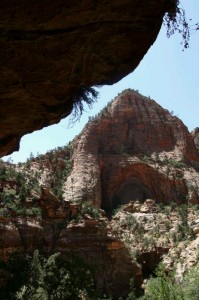 Patrick leads the way despite too slight elevation and nausea. Along the way he creates his own natural waterfall and we rest in the shade.

Suddenly we hear voices among us. Two people dressed in green with hats on, actually come out of nowhere on our path.

I can't resist and say with a smile, "Taken the easiest road?" The rangers can laugh about it happily and we run after them if it turns out that they are also (faster than us). When Patrick and I go around a corner, we'll see oncoming traffic. One puts her foot down wrong and slips down, towards the abyss.

Luckily for her it doesn't run down steeply, she immediately has a stone fixed and can help herself get back up in no time. Patrick and I see it happening, not the women behind us. Fortunately though. Evelien doesn't have that much with heights, so this didn't do her confidence any good.

The road to the car doesn't cause any problems. There's a line of cars waiting for the tunnel, but the parking lot is almost in front. We are allowed to insert from a huge camper van and when we enter the tunnel, we see behind us a male stop the camper, we are the last. Sorry camper!

In the hotel we fill the water, eat some, ask how Patrick is doing and still go back on the road. With a small change: no long trails, but some little ones, so that the bus can be taken back quickly. This is well arranged in the park.

Buses outside the park run around all hotels, shops, restaurants, etc and within the park there are a number of one-after-two in circles that drop you off at the start of a trail. We picked two smaller ones.

The Grotto turns out to walk a path parallel to the bus line between two stops, with no shade, special views or other things so we are quickly back on the bus for another stop.

The Archeology Trail goes to a hill where there is a sign explaining how and what took place on this hill. We also expected a little more of this, the same way we take back, but not without having made a panorama.

Then we'll keep it for the last time. After a cooling shower, it's time for the evening. After dinner I read the latest posts from my inbox, whatsapp and Facebook. A message on the social bulletin board offers a joke because of the time difference with the Netherlands.

Just wake someone up in time