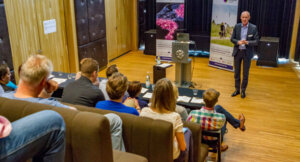 When the question on the internal network came along if anyone had any sense and time to take pictures during an event, my interest was piqued.

The event called Enexis Battle would be held in Arnhem from 10:00 to 18:00. Not at Assen next door, but a nice challenge!

After a number of questions were answered, I signed up as a photographer.
Through a colleague from another branch where I worked, I heard that more well-known colleagues were to be expected. It's nice to see it again.

Once inside, I find the old colleagues more like the organization. After having a chat, I report to my contact of the organization and i am shown around. Large hall, theatre and a small room for the jury. Fortunately, that's not so bad. The beginning of the day is the meute walking along. After the introduction in the theatre, everyone is divided into eight groups between the main hall. Here they stay until the break, so that creates some peace for me. The organization has also arranged a film crew and we give each other the moments. Every now and then we look at each other to see if we are not in each other's picture, but that goes very well all day long. 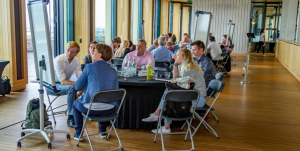 They turn out to be from a school with audiovisual training and they are very enthusiastic about the assignment. Normally only the third year students get the opportunity, but because of the exam week this could not and the freshmen were approached. They see such a whole day for a company record as a big assignment. If more of these days are organized, they would like to come again. Learning in practice, how beautiful can it be.

A network game was devised during the break. I eat the delicious sandwiches, talk to the former colleagues, turn my glass of orange juice back and get back to work with the camera. The group that has exchanged the most colors will be given extra time for their presentation. Everyone walks through each other, looking for different types of tickets. When after the break the judging starts, it's really hectic.

The eight groups are divided in two between the judges. One half of the jury is in the theatre and the other half is in a smaller room. The spaces are not next to each other, but are separated by the main hall. In the beginning I walk from the small room, through the main hall, down the stairs of the theatre to get to the group. And quietly back into the small space where the next presentation is already underway. Not only me, but also a photographer and film crew from the school. At some point we decide to split up as photographers. Me in the theater and she in the small space. This way we disturb the groups less. 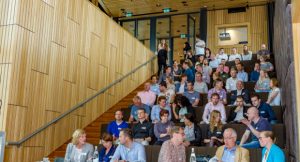 The Theater is darker. I have to put my camera to work hard to pull some decent out and it's not really well known for that. With the software, this will hopefully be pretty polished out afterwards, but I now run into the restrictions for the second time in a short time. I'm going to have to think harder about a full-frame camera. It is better suited for situations with difficult lighting conditions. My lenses are now on level, so that can't stop me. Be prosecuted.

The judges come together when all the presentations have been and have to select 2 groups that go to the final. The two remaining groups present their idea again, but for all the judges. The jury takes the time and doesn't bother me that I walk around them for taking some pictures. If they've chosen a winner, I'll go back into the theatre and take my position on stage.

After the winner is announced, applause sounds and the cup is handed over. The management is going to take serious work of the ideas that have been put forward. As a thank you, the judges get a bunch of flowers. They haven't forgotten about me either, i can come home with that. In addition, there is a voucher from Bol.com that always comes in handy.

Enexis Battle, it's over 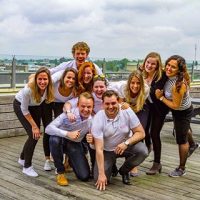 This is followed by a drink in the main hall with bitterballs to discuss the successful day with all of them quietly. I'll shoot some more pictures and then put it all up. It's been good. In the end, the organization and I are the only ones left.

The group photo has already been taken, which I will later find on the own Instagram account where Enexis shows a behind-the-scenes look at the experiences of several colleagues. We leave the place behind and go in a different direction outside.

A while after that I see a message on the internet containing three pictures that were shot by me. That's nice to see again.