The Autumn Desert Trail is over, but I'm still working on it.

After the weekend I came home with some full memory cards. Once transferred to the computer I realize how big the damage is: about 4,400 photos!

A number of photographers appear to have already put an entire folder online. All channels are used: Facebook, Google+, Oypo, etc. Speed is everything.

I have not for nothing made all the preparations for this (sports) event heading towards this weekend. I start with the first step, the first photo and in the meantime think what is useful for myself to keep the overview. Saturday's photos will be distributed. For every hour, I create a folder. When I see that in the first and last hour not many riders have been photographed, I add it to the other hour. This way, I can use me to edit, save as and then upload the photos to Oypo step by step.

It's three long steps. Saturday was very sunny with occasional clouds, so the pictures are not always well exposed. Or the white balance has been upset. Sometimes the photo has to be digitally cropped or straightened. Only a single one I have to remove because of blur. The new lens has more than succeeded during this big test and I am satisfied with the results.

The first load can quickly go online. Because more products can be ordered via Oypo, the original file is requested. It's a few hundred, good for 6 GB. Uploading will take time at a maximum upload speed of 0.5MB per second. My brother has watched some other albums and seen that the prices are lower. Because it's my first time doing more with my photos taken, I'm lowering my prices. Once visible and viewed, I get nice comments in the Facebook group. I react, give thumbs off, thank them for the fun posts and continue editing the following photos. If one of my personal favorite photos is bought later that evening, I'll feel even more like putting the rest online as soon as possible. That was a few nights ago. 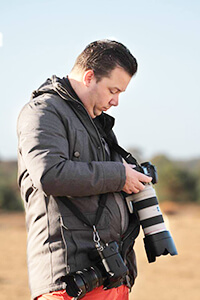 Meanwhile, it's Wednesday. The rating just like the sentence is there, but the time available in processing all the photos is disappointing. Evelien selected her photos of her ride with friends on Saturday afternoon on Monday and they are all on Facebook. Profile pictures have been changed, great fun to see. The fact that I noticed my orange ski pants in addition to my photos is evident from a call on Facebook. A group of riders is working on their photo book, but they can't find the right picture between the albums of all photographers. The photos were taken by a photographer with brightly colored pants. Um, that can only be one, and Evelien, who has spotted the message, sends them to my album with a link. I'll give you another reaction under there. That's nice that interaction.

At some point I come across pictures that are less sharp than expected. If I see a shutter speed of 1/200 I can beat myself in front of myself. On the day itself, I saw that a button had been pushed. Probably by a motion of the camera against my hip. But the fact that he's been on this stand for so long is a wise lesson for next time. Fortunately, the damage is not so bad. Via Facebook I get a few messages from riders or I also took pictures of him/her. That may mean that the pictures are good so far or that they settle for my quality because of the low price.

Through Oypo I can see the number of visitors per folder. The photos are well viewed. My website is peaking, so the business cards have helped. The first day I handed out a handful of them, but day two they regularly asked for a business card. On the other hand, I have retained enough of the 250, but i will lose them with the following plans. Be prosecuted.

Like editing and uploading; I still have plenty of pictures to go ❗